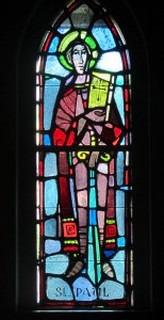 The Episcopal Church celebrates seven Principal Feasts every year. Can you name them? Most people can come up with Easter and Christmas. If you also thought of Pentecost or the Epiphany, you’re probably ahead of the curve. The other two? Ascension Day and Trinity Sunday, of course!

Two of our Principal Feasts are always celebrated on the same date, regardless of the day of the week: Christmas is on December 25, and the Epiphany is twelve days later – in keeping with the tradition that it took the “wise men” twelve days to get to Bethlehem – on January 6. Easter, of course, is always on a Sunday – the first Sunday after the first full moon that falls on or after March 21(!) to be precise. Ascension Day comes forty days later, on a Thursday. This tradition relies on Acts 1, where we find the story of the risen Christ being whisked off to heaven on a cloud forty days after the resurrection. The Day of Pentecost is ten days later – the fiftieth day, counting from Easter – because of the report, also from the book of Acts, that the Spirit descended on the apostles on this day. Trinity Sunday, one week after Pentecost, is the most recent of our Principal Feasts, universally observed only since about the 14th century.

All Saints’ Day is the only one of the Principal Feasts that can be moved from a fixed date – November 1 – to the following Sunday. The earliest known references to All Saints’ Day are from the 4th century. From about 610 on, it was celebrated on May 13, until Pope Gregory III dedicated a chapel in the basilica of St. Peter’s to “All the Saints” on November 1 sometime in the eighth century. In our time, celebrations of All Saints’ Day tend to focus on the lively connections among all God’s faithful servants in all times and places, the living and the dead, the revered and the forgotten. We are the communion of saints, we are the Body of Christ! Alleluia!